The Spiral Ginger, Costus barbatus, looked luscious in the morning after an overnight storm.  The rain made the red flower shine.

The Spiral Ginger has not bloomed in awhile, so it was nice to see two of them blooming.  I tried to get a photo showing how the leaves form around the stem in a spiral. 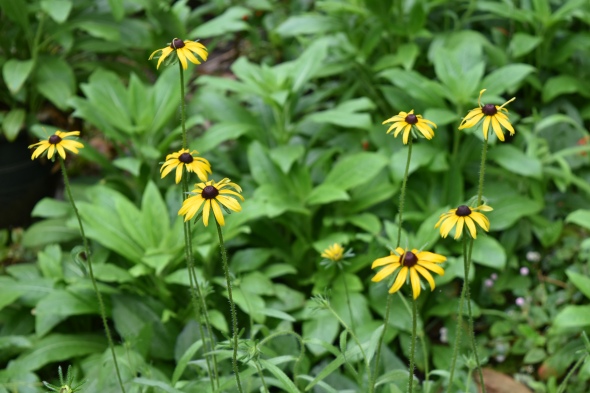 As long as I was taking pictures, I checked out some other bloomers.  The Black Eyed Susan pops up in different locations around the yard.  This one is self-sowed.

The Salvia coccinea also reseeds on its own and is loaded with flowers to the delight of pollinators and hummingbirds.

I was surprised to see the Hyacinth Bean had suddenly flowered.

Another surprise was finding a Resurrection Lily Ginger, Kaempferia rotunda, had bloomed.  The flower comes before the leaves.  It is a pretty little thing.

Cuphea ignata which is commonly called Cigar plant has been blooming profusely and is a hummingbird favorite.  I saw that this  plant sold is as an annual up north where it does not get very big with the short growing season.  Mine is a perennial and grows nearly 5 feet tall and spreads easily to make new plants.

The Gardenia is so heavy with delicious scented flowers, it is bent to the ground. 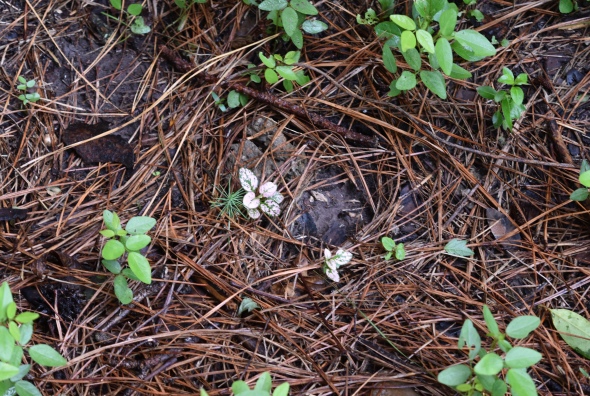 And now a garden mystery, which I love.  I found my Pink Polka Dot plants growing nearly 30 feet from where they were planted.  How did they get there?  Something to ponder.  Of course, I love a volunteer and they will be moved back to the original bed.

This is a Rufous Hummingbird and probably a female.  She was very difficult to photograph and these photos are through a window. Click on the photo one to two times to enlarge and see her colors.

There has been a Rufous in the Automatic Garden for the last 7 years.  They can be found as far north as southern Alaska, which must be why the little birds can tolerate recent night temperatures in the 30’s.

She is perched on the remains of Texas Star Hibiscus stem right outside the kitchen window near some Cigar Plant (Cuphea ignata) that is still blooming.  It is a favorite perch for all the backyard birds. 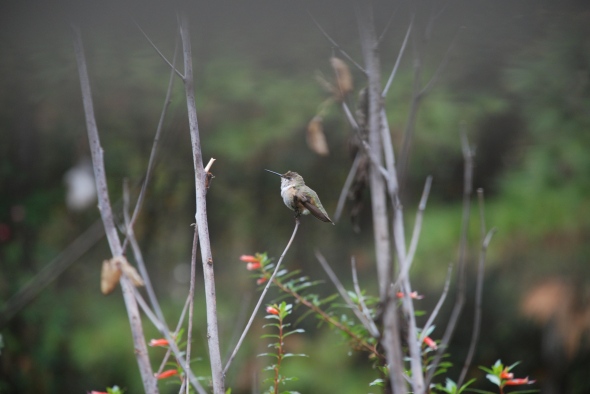 As Rufous Hummingbirds are very protective of their nectar source, she is often seen chasing other birds around the garden even though they are much bigger than her.

Notes and photos from our walks and garden.

Learning life's lessons in the garden!

Putting in a little

in my spare time

My Own Paradise: Life on Seven and a Half Acres

This WordPress.com site highlights our mountain garden and the seasons, seaside reflections and some travel musings.

Still learning after all these years.....

My week to week gardening diary

Life on the Green Side

The Task at Hand

A Writer's On-Going Search for Just the Right Words

Flora and fauna in a North Carolina garden.

Edinburgh Garden Diary
A Walk in the Garden

For all who appreciate the beauty of words, flowers and homecooking

Ideas from a Suffolk garden

Muddling Through My Middle Age